To provide structures for artistic engagement, exchange and discussion.

b aSI ca lly Bauhaus is a collaboration between two artists under the aegis of INCON with…, a series of collaborations conceived and established over 7 years by Neil Ferguson.

”The work followed a trail of interaction between humans and computers. By passing texts, sounds, and images into computational languages that the program designers didn’t plan, the software used threw out unexpected information.

The projected images are scans of linear drawings initially made in response to sounds generated by a score writer program.

Later the words produced by the Image > Text translator application were fed back into a score writer software, generating a new sound file.

Next, this file was converted from .mp3 to .doc format and back again.

Within the exhibition space, the digital equipment created randomized orders of images and sounds, creating a short-lived iteration of a potentially infinite chain of translations.”

”Public Hanging”, was a collaborative, collective presentation by the audience from the 452 black pen drawings available. No aims, few words, no titles… just drawing .

The audience hung their selections and taste in public.

It can be too easily ignored how much painters make reference to other paintings and painterly practices.

INCON with(16)…displayed16 circular paintings, painted in alternative stages without verbal or written communication between the collaborators.

INCON with(16)…arose as an attempt to highlight their interests in specific  paintings or painters.

INCON with(16)…allowed each painting its independence through a directed system of production. 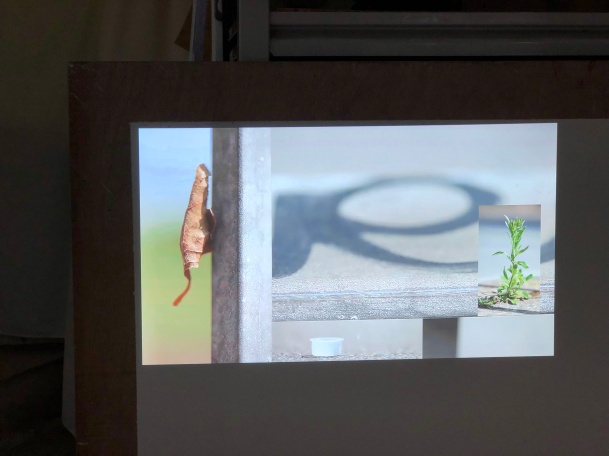 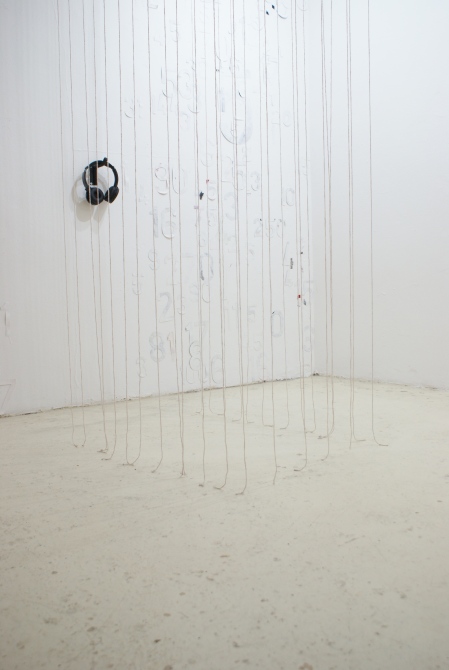 Ferguson and Storrie  redacted a variety of publications from Beckett plays and short stories to free gallery handout sheets, cookbooks and detective novels.
…TING FOR DOT was an interactive event where the audience were asked to apply their own redacting systems to TING FOR DOT texts.

Images from INCON with(13)… 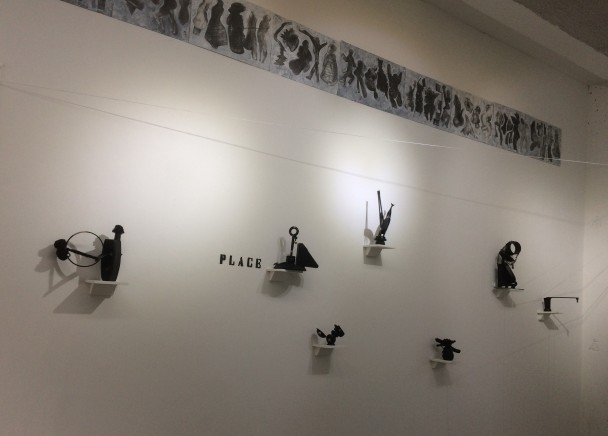 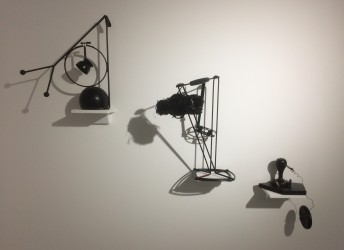 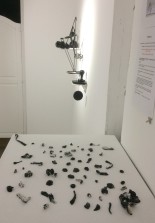 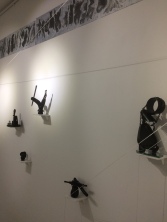 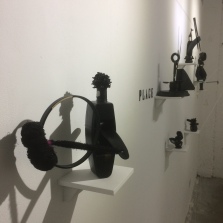 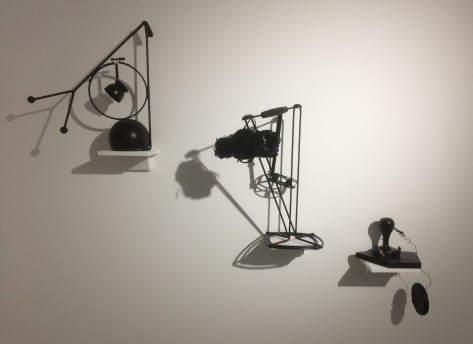 “Art is not there simply to be understood. … It is more the sense of an indication or suggestion” . Joseph Beuys
The events were set up around composed sets of simple and complex visual compositions and assemblages.
The works look to induce “non-sense”, NOT reduce through a shared understanding.
THE Same but different “…makes looking “irrational “, producing “surrational” events that go beyond the rational in “recognised sense” and open up the opportunity to apply the “non-sense” in our thinking.
At each event the viewer is invited to form their own sense out of our 5 point, 5 object rule.
The 5 point rule directing our decision making is taken from Miro’s sketchbook drawings linking the 5 points of a human cell to narratives in figurative movement and structure, thus allowing objects or drawings to evoke wider considerations and narratives than simply through their component parts and construction. Allying this Miro’s 5 point rule to a concentrated, analytical, Beuysian exploration of the historical materiality in things and their making, allows expansive potential in engaging with our works.
“THE Same but different “… 2 very different events in 2 different venues. 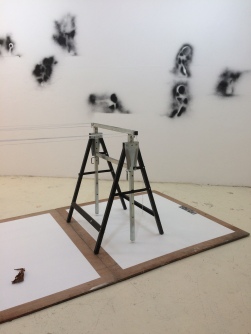 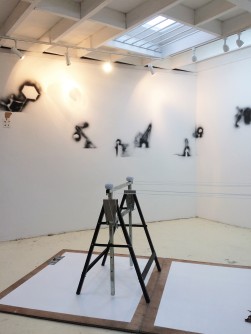 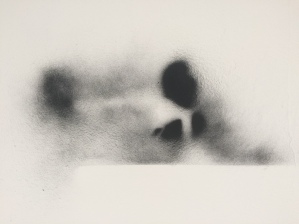 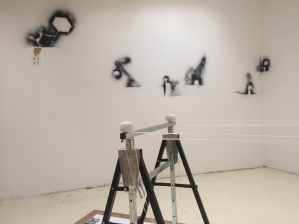 IN Conversation with(11)…wrong for the right reasons 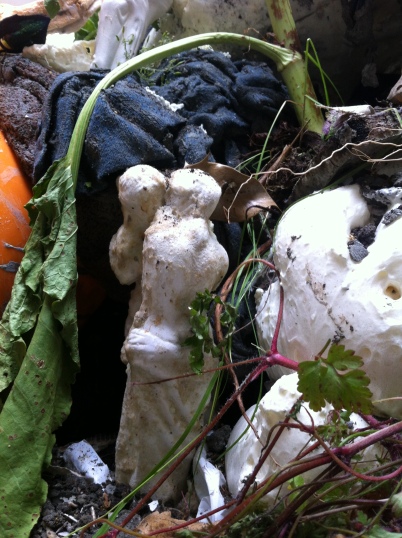 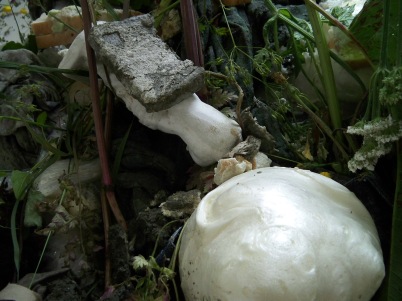 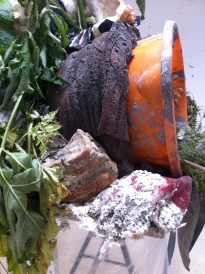 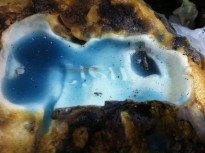 …an opportunity to play unique musical instruments and make sounds from abstract drawings. 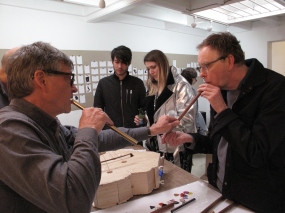 The Reward:
“If we had not done what we did at Dungeness we would not know what we know now. We would not have that knowledge.”

The collaboration involved walking on the stony barren beaches of Dungeness in mid December 2017 in seasonal, but wholly inhospitable weather; locating ourselves in particular unsheltered spots that anchored, drove and shaped our actions.

All actions were relative to the circumstances, directed by the environment. Records were made on pre-prepared paper working only with what was found, extracted, mined in the cold, wet and windy conditions. These “works” looked to capture the moments of their production where scraping, grinding and pulling boards across rocks and sand left “histories”, capturing the physical and sensory connections involved. Would they reflect what was being felt? Would the outcomes measure up with the sensorial difficulties?

“Raw Rewards”, Incidents from Dungeness, are products of “touching with the earth”, where the environment refuses interaction – sandwiched between the savagery of the elements and the coping strategies for recording in extreme discomfort. No transference of pleasantries…more the exhilaration of coping with raw difficulty; strategies sustaining efforts “keeping us out there”.

The 2 Act play took the form of a meeting on previous meetings about writing a play as an artwork.

…a play as a continual play about writing our play.

Beyond Controls is formed out of 10 sets of 32 drawings.

From initial lines, each drawing was scanned, emailed and printed to be developed further by hand. The repetitive nature of these procedures regularly exposed the limitations and idiosyncratic qualities of scanning and printing.

The structure of the collaboration would always be infinite, sequences without final drawings, statements held in digitized time. Cycles of series that cannot be closed, like circles that cannot be joined.

“Ivy Road is an Artwork”